I've been working with at lot of Noro Kureyon in colour 242 of late...

I love it because, well, it's Noro... but specifically because it's got precisely and exactly the colours I wear in it: black, orange, red, a bluey-grey and a smattering of green.

First up, there's a crochet scarf, in 2 skeins of the sock weight....

Many props to Tamara and Jennifer for their help with this project - turning me into a real crocheter in the process. 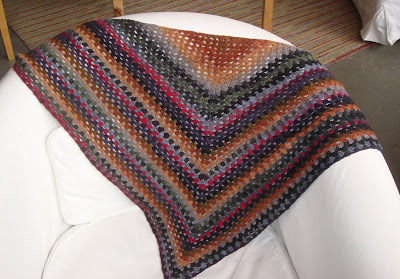 And there's a skirt!

Further details on the skirt next week.

And then, of course, there's what to do with the leftovers of the skirt... I have 49gm (!) left over. The skirt took 3.02 balls of the Kureyon, and I figure there's just enough left for a hat, to match the scarf.

I had the brilliant idea of making a short-row stripes hat in the style of my beloved Lizard Ridge - turns out, I'm not the first to have the idea. Some fun versions of just such a thing on Ravelry.

My other thought is to do a plain black vest and use the Kureyon as stripes.

In the meantime, until I decide, there's a new lace design on my needles, tentatively titled Wings of The Dove.
Posted by Kate at 3:39 pm

The skirt looks amazing! And looks very stylin' on you. I think I'm falling in love with this yarn.