A perfect match of yarn and pattern

This is one of those times when a knitter's yarn choice is better than my original.... 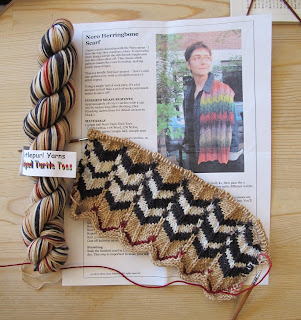 This is the Turtle Purl self-striping sock yarn in the Burberry colorway, used for my Herringbone scarf.

Seriously, how good is this?

Very proud of Brenda, and I can't wait to see her finished project.
Posted by Kate at 4:43 pm 5 comments:

I carry my knitting around. A lot. I'm a public transport user, and I never go anywhere without at least one knitting project.

I've used any number of little project bags to nestle into the corner of my purse: everything from purpose made knitting bags, to ziplock bags, to repurposed camera bags, you name it.

I met the lovely people of Della Q at TNNA, and they introduced me to a line of theirs I hadn't seen before: the Edict Project bags.

Naturally, the Sock Project bag was the most appropriate. It makes me happy. 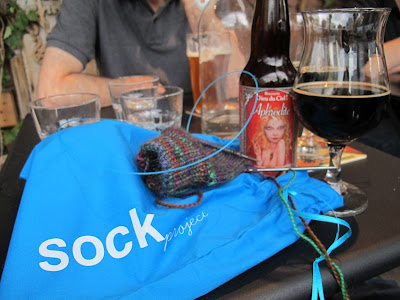 In addition to being adorable, it's very practical. Large enough to hold the yarn, the sock-in-progress, any pattern notes, and the sock's mate (so I can count and make sure I've worked the same number of ribbing rounds on both), it's still small enough to tuck into my purse.

Some clarify the state of your knitting: "Tangled String", "Handknit for you", "Knit with Love".

And some declare the state of your mind: "Shh.. I'm counting", "Naughty Knitter", and "Paws off My Knitting".

Reader Mail: On Stopping, or Not

I recently met a knitter, D., in a class.

We've been having an email discussion, and she made a passing comment at the bottom of her email...


"BTW, for when we knit late at night and we don't want to let go and stop... any suggestions?"

It made me laugh, because I knew exactly what she meant... I bet every knitter does. That compulsion to keep going, that need to work one more row, to get to the next step, to knit on, late into the night, when you know you should be asleep. 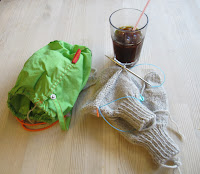 I'm often knitting to a deadline, working on design commissions and samples. For those projects, there's sometimes late nights. Right now, I'm working on a pair of mittens that need to be completed for photography, and I'm knitting on them every spare moment I get. Which includes knitting late at night. I can't stop, because there's a deadline.

But it's not the same. What D. is talking about is that compulsion to keep going on something for the sake of it. Because you're enjoying it. Because you don't want to stop.

This happens to me less often with knitting - because I am most often working on things I need to knit - but I suffer from it terribly when it comes to crochet. 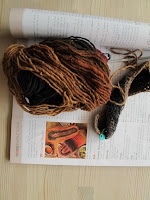 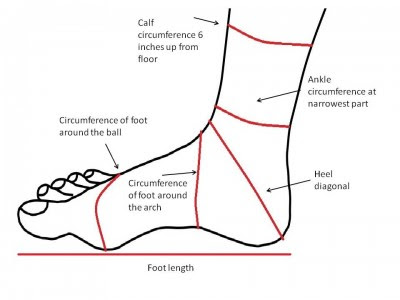 It's been a long time coming - for which, apologies - but the results of the foot size osurvey are now available, Over at the Knittyblog. Not only the data, but I've done some analysis on what the results mean for sock knitters and sock designers.

Photo of the Day Has Been Dormant: Back At It!

Make this the last but most important lesson in my quest to become a better photographer: you can't get better if you don't actually take any photographs.

I got back at it this morning.

There's epic construction along my usual commute to Friday morning class at the Purple Purl. I've been trying a new route, the College/Carlton/Gerrard streetcar, and there's a 10 minute walk done Jones Avenue towards the shop.

It was a hot, bright morning, and I was looking around the unfamiliar neighbourhood as I walked. I loved the little peeks into the backyards through the alleys between the house.

This one seems particularly inviting: sunshine leading me down the alley, to an open gate, through which you can pass into a lush green garden. Urban oasis indeed. 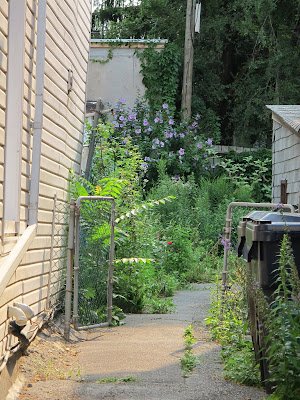 I'm pretty pleased with this one: no edits made at all. I sort of wish the recycling bins weren't there, but they do add to the "urban-ness" of it all.

Hoist with my own petard

The problem with being opinionated about things is that they come back to bite you sometimes. And I've been bitten.

I don't like these sorts of things, particularly for patterns aimed at less experienced knitters, because they can seem awfully intimidating - and they require either math or a high degree of confidence to power through. I understand why designers use them, absolutely - mostly to save space in the pattern - but they're scary for less confident pattern readers.

Now, the important thing to know is that ultimately, if the designer isn't specific how about to decrease, or where, then it doesn't really matter. You just need to get to the right number of stitches.

I'm working on some new patterns, with multiple sizes and multiple gauges, and I've found myself in need of the following instruction:

The problem is that this particular pattern is aimed at newer knitters, and I realized that there was no way I was going to let myself get away with this. So I had to write them all out - 10 different rounds! It took a surprising amount of thinking.

I haven't proofread them yet, but I think I got them right. I hope. But most of all I hope this makes my pattern easier to work.
Posted by Kate at 6:40 pm 3 comments:

I'm over the moon that I've been asked to teach at Interweave's fabulous Knitting Lab event in San Mateo, California this coming November.

I'm teaching two of the classes for which I am best known:

Two Socks In One: The War & Peace Method


The Sock Knitter’s Mount Everest? This class teaches the legendary technique for knitting two socks at the same time on the same needles, one inside the other, as mentioned by Tolstoy in War and Peace.  In the class, we’ll work a pair of mini socks using this amazing technique.  The design we work is top-down, but the techniques I demonstrate are easily applied to toe-up knitting.

Designing Custom-Fit Socks
Liberate yourself from pattern books, and ensure your socks really fit properly! Learn how to create a top-down or toe-up sock pattern for any yarn, and for any foot.  We’ll cover knee socks, and discuss special fit requirements like high arches, flat feet, skinny and not-so-skinny ankles. I’ll show you how to apply pattern stitches like lace, cables and colorwork, and how to manage differences in gauge and fabric stretch.  You’ll leave the class with a set of templates and guidelines for all your sock fitting needs.


This class will teach you everything you need to know to be a confident Fair Isle knitter. We’ll review the history of Fair Isle knitting, and discuss the types of patterns and how they evolved. Through practice swatches, you’ll master reading the patterns and charts, and working with multiple colors - both one-handed and two-handed methods, both in-the-round and flat. In the second half of the class, you’ll be provided with the motifs, templates and yarns to design and create your own pair of unique fingerless mitts.

More info about the event here. 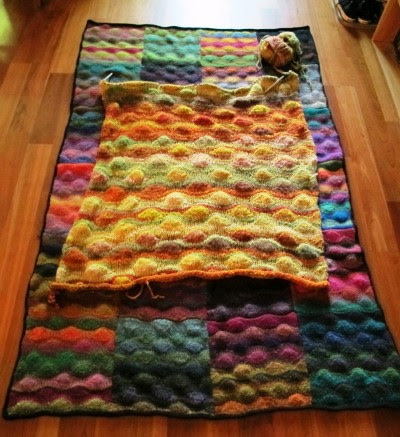 This project is making me very happy, and it's coming along brilliantly.

I don't know why I always end up knitting heavy blankets or similar in the summer. Over the weekend, in temperatures in the mid-30s (Celsius), I was working on a bulky-weight cowl...
Posted by Kate at 12:45 pm 1 comment: