About Me And Hilda 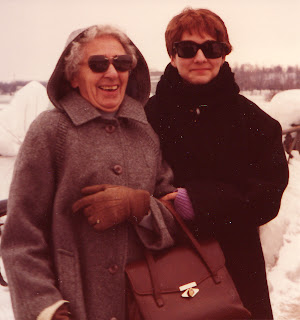 The two Hildas on a snowy day in Niagara Falls, sometime in the 1980s.
I am wearing a lilac wool turtleneck she knitted for me.

I was taught to knit as a child by my grandmother, Hilda Lowe. Hilda was a legendary knitter in her own right and  I remember with great fondness all the sweaters she knitted for me.  We took them for granted - we wore them, we grew out of them, we wore them out - and then they disappeared.  I have just one of her sweaters left, and I treasure it.

A family legend - sadly unconfirmed - says that Hilda used to earn a penny turning the heel of socks for knitters in her neighbourhood, when she was a girl.

Me, I'm a mathematician and refugee from the technology industry.

I'm Knitty's Lead Technical Editor and it's just about my dream job.
I'm also the Knitting Editor for Canada's A Needle Pulling Thread Magazine.
And I'm a regular contributor to books and magazines, including most recently the Spring 2012 issue of Sockupied.

I teach regularly at stores around Ontario - I have regular gigs at The Purple Purl and Lettuce Knit in Toronto; and make frequent appearances at others shops, including Shall We Knit and The Needle Emporium. I teach at the Downtown Knit Collective's events and the Creativ Festival.

I also speak to guilds and groups like the K/W Knitter's Guild, The Regal Order of Crocheters and Knitters, the Around the Bay Guild and the Kawarthas Guild.