My friends at Signature have recently released a new product: a blocking cloth. It's got grid-lines woven in, at one inch intervals.

I love this thing. I don't know about you, but I struggle with straight lines. Especially when pinning out pieces for blocking.

This week, I blocked a tank top for a friend of mine. It has a lovely lace edge, and I offered to block it so that the points of the scallops were nicely shaped. (She doesn't have the pins and mats that I do.)

I carefully pinned it out by hand, eyeing the edge to make it straight.

I unpinned it, and got an edge that I thought looked pretty good, until I laid it on the blocking cloth. Holy curvy edge, Batman! 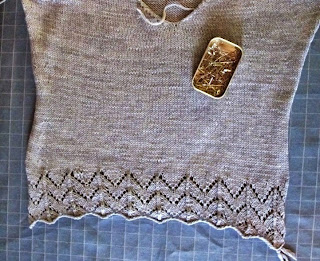 So I repinned it, using the 1 inch gridlines as a guide. 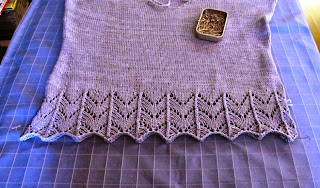 Look, Ma! A straight edge. In addition, the grid provided me a very easy way to make sure I had pinned the piece out to the right width, too.

The cloth is colorfast and washable, and sits nicely on top of your blocking mats (or floor, or bed, or whatever you're using for a blocking surface).


This is the sort of thing you do when you live in an apartment. (And yes, we do move the mat when the dog is actually in the crate.)

Not socks: the return of the Pi shawl

I've just wrapped up a pretty major project: a book about Custom Fit socks. I've shipped off the box of samples for photography, and mailed the manuscript to the editor, and so now it's time to work on something else for a while. (The publication date is the middle of next year, so I'll thank you in advance for your patience...) Between my book and some other design projects, I've knitted nothing but socks since November, and I was desperate to cast on something that wasn't socks.

So, firmly not socks... a Pi shawl design. 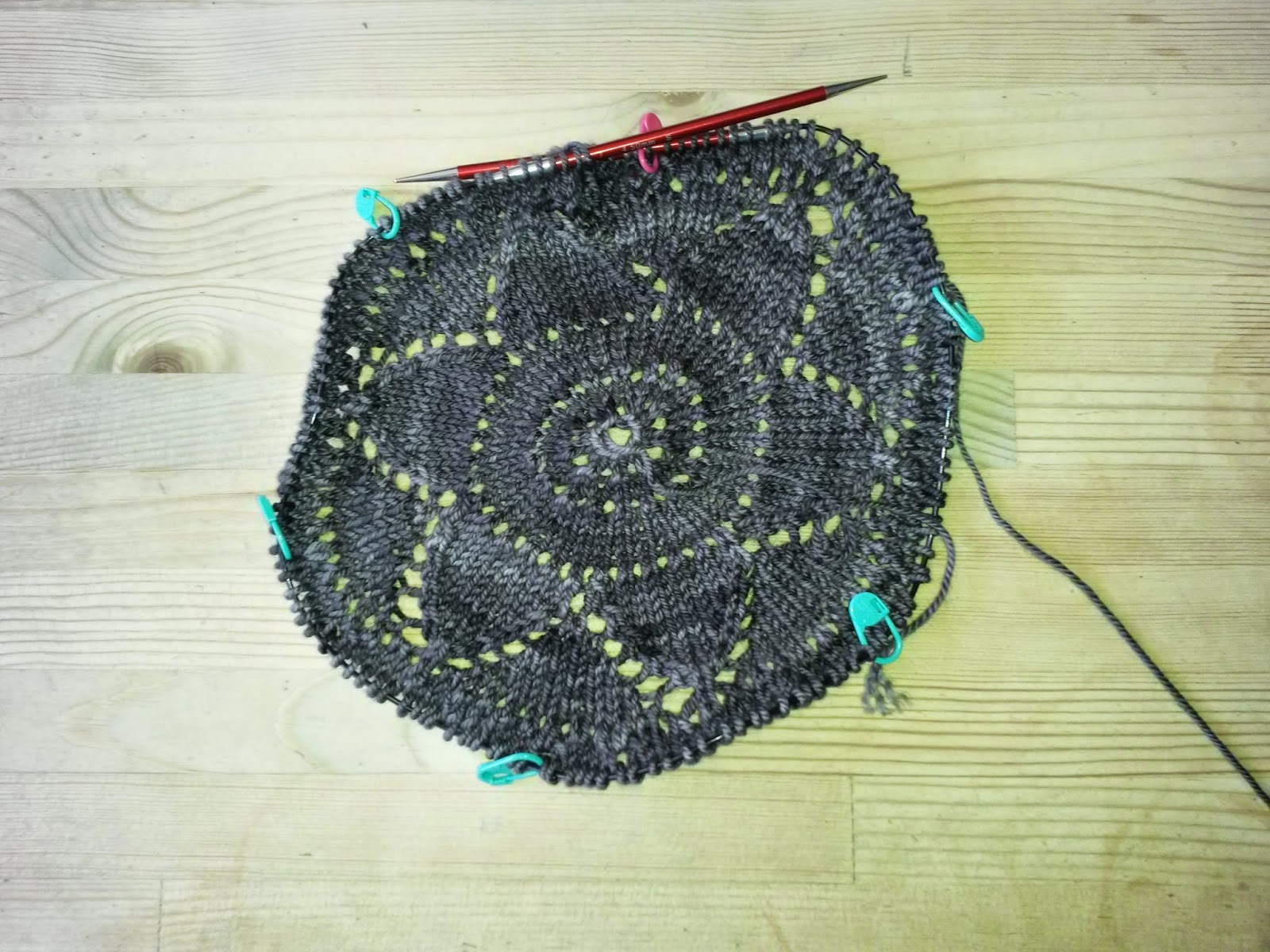 I've designed a couple of circular Pi shawls over the years... one using Shetland stitch patterns, and the epic Snowflower project, published in the now-defunct Yarn Forward Magazine in 2010 or so. Both samples have been lost, sadly. (The Snowflower was cashmere, too, damn it.) 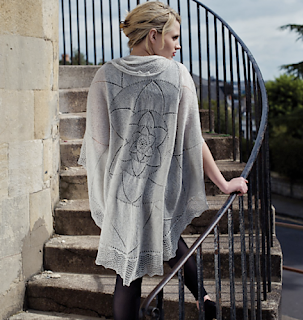 I learned some important lessons with those two designs. I learned that the piece needs to be pretty big. Although Shetland Skies is pretty, it's a bit too small to be easily worn. 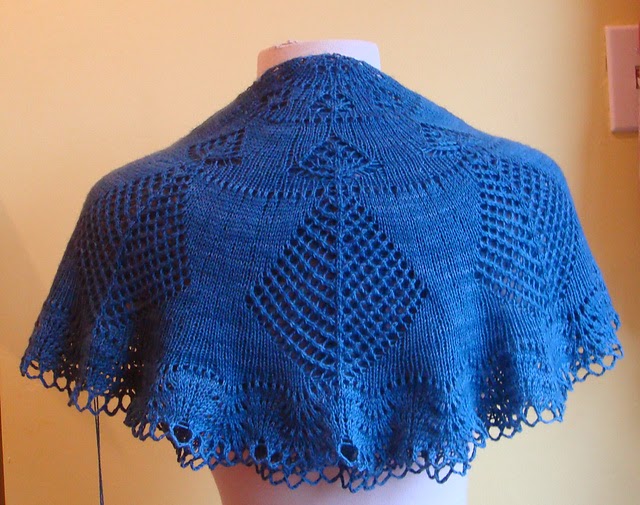 And I learned that if you're going to knit a big piece, if you use a laceweight yarn, you'll be at it for a while... the Snowflower sample took about three weeks of very dedicated knitting, and about 1200 yds of yarn.

But I also learned that I love the concept.

It's all based on the mathematical relationship between the radius and the circumference of the circle... hence "Pi".

Now, as Ms. Zimmermann says, you barely need a pattern for this thing... you start at the centre with 9 stitches, and there are only six shaping rounds. Every so often, you simple double the stitch count, with a round of (yo, k1). You can make a plain one, or a very simply patterned one. Or you can go to town, as I have done, and apply your own patterns.

This new version is an update... rethinking... extension... expansion... of the Snowflower concept. Although in a heavier yarn this time - indigodragonfly's earth-shatteringly delicious UberMerGoat merino cashmere DK weight, in Cumberbacchanal -- so hopefully it won't take quite as long.

Very happy with it so far. 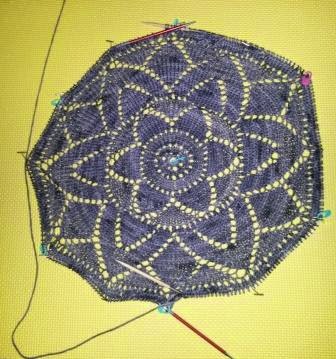 As soon as the pattern is ready, I'll let you know.

And if you're interested in designing your own, I'm teaching a class on this at KnitCity in Vancouver this October.

I am not a fan of camping. Intellectually, I get the appeal of "the great outdoors", but I just can't do it. No running water? Sleeping on rocks? Bears?

And so when Julie of the Needle Emporium asked me to go to Camp with her, I was a bit worried. I have a terrible poker face, and I might have spluttered a little bit.

"But Julie knows me well", I thought. "She knows me well enough to have bought a kettle especially for me when I'm teaching at her shop. Why on earth would she be asking me to go somewhere where there wasn't a kettle?...."

Before I could start coming up with excuses, Julie explained. 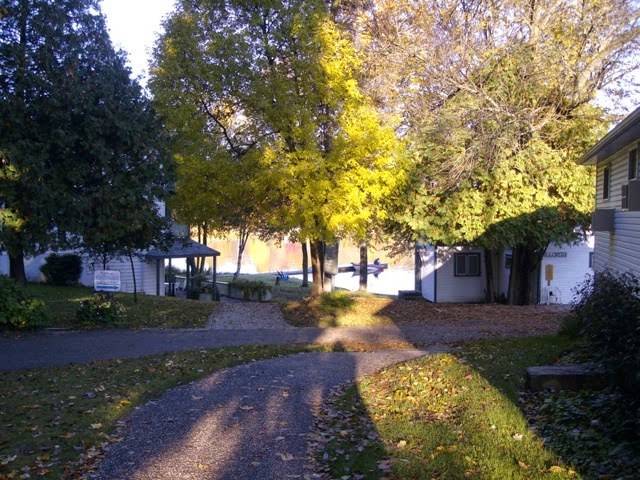 Needle Emporium Knitting Camp ain't camp Camp. There are no tents. There's proper beds and plumbing and drinks of both the hot and cold variety. And she explicitly promised no bears.

Knitting Camp sounds actually rather fantastic: a weekend of knitting and workshops and eating and drinking and games and silliness and fun. It's at the Bayview Wildwood resort, a little north of Toronto, which is entirely civilized.

I was already in, and then Julie told me that Sally Melville would be there, too. I can't wait to meet her.

Come and join us, September 18-21st. It's a fun weekend away from home - there's a view of the lake, and the food is great, and apparently they don't make you make your bed. Add knitting, and it makes it absolutely perfect.

I'll be teaching a variety of classes and workshops: Toe Up Socks, Sizing and Fit, Fixing Mistakes, and my Expert Tips workshop. Sally is teaching some fantastic classes, too. More info here. Come and play!