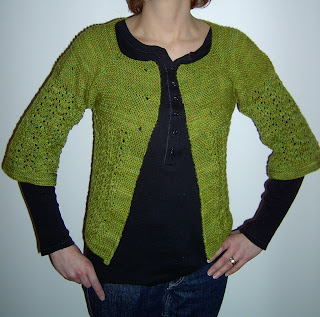 The February Lady Sweater. Done. Yes, as predicted, I picked up speed once the yoke was complete.

I used exactly 3 skeins of Dream in Color Classy in "Spring Tickle". I like the yarn very much - the colours are great, it's got a nice hand, and it washes very well. It also doesn't feel so soft that it will be wildly pilly.

As to the garment itself: it's interesting.

In this context, the raglan shape isn't an issue because it's supposed to be worn open, so I was able to choose a size that fits me around my smaller shoulders and not worry about the fact that it doesn't really close over my somewhat disproportionate bust... (It's not that I'm huge-busted, but let's just say that I've got more of a 1950s figure than a 21st century figure. A good old-fashioned hourglass.)

Although buttons haven't yet been added (Denny, over to you!), I would only really be able to comfortably button the top one. But again, it works for this style.

Other knitters have expressed concern about the final set of decreases. Unlike most top-down raglans, where all decreases are done at the sleeve seams, there is a final set worked as yarn-overs near the bottom of the yoke. You can see them clearly in the back view.

I am unconvinced. I think it looks sorta weird. Lots of knitters have worked them as m1 increases rather than yarnovers, so they're not visible. 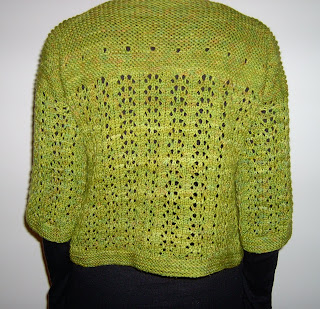 I agree with this modification.

As mentioned, this isn't for me - despite the fact that I love the colour. It's a sample for a class I'm teaching. I really wasn't sure I'd like the finished object. I like it more than I thought I would, I'll be honest. It fits pretty well, and is suprisingly flattering.

I might even do one for myself... with a few modifications, of course.
Posted by Kate at 2:24 pm

Lovely colour. For some reason, when I made my first version, I seem to recall those yarn overs being closer to the lace section. No pictures, so I can't know for sure. I've had a really hard road with this sweater, as I just wrote on my blog too.
(On an unrelated note, I was trying to email Lettuce Knits with the address at the bottom of the class info page, and it came back to me; I'm trying to find info on Procion Dyes. Do you have a current email address for them?).

Kate I love it. The COLOUR is gorgeous!