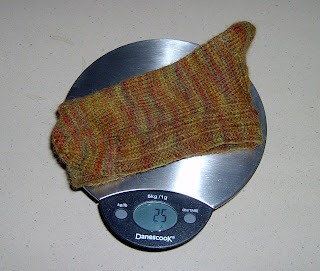 I've finally invested in a digital scale. It's been on my wish list for a while, and it was J. that pushed me over the edge. She brought her scale to class recently, and we had a wild time weighing socks and leftover yarn.

Back when I worked in an actual office for the day job (rather than at home as I do now), I used to sneak socks and balls of yarn into the mailroom, to weigh them on the postage scale. It's a simple problem, really. When I've finished knitting a pair of socks, there's invariably yarn left over. And often, a fair bit. The question is how much yarn -- and would it be enough for another pair of socks?

So I found myself this rather attractive and shiny digital scale. Super accurate! Reads in increments of a gram up to 5kg!

I can now definitively answer the question. I can weigh the socks, and the leftover yarn. Look at this one - it's 25gm. As is its mate. Which means that I've got just about 50gm left of the 100gm skein -- just enough for another pair.

And for those partial skeins that aren't quite enough for a full pair -- well, I've got lots of leftovers. How about contrasting colour heels and toes? Stripes?

Once upon a time I estimated how many pairs of socks-to-be I had in my stash... More than 20, if truth be told. That was just for full skeins. Now that I can accurately weigh and measure the partial balls, that number has gone up significantly... I see a whole range of striped and multi-coloured leftover-using-up sock designs on the horizon... Recession-friendly stash-diving sock knitting -- there's a thought!
Posted by Kate at 8:20 am

Ok, that's me convinced.. not sure where to get a pair out here in Saudi but will definitely try.. as for wool.. I have to have that sent over too !

I love socks that are randomly striped with sock yarn leftovers...or Magic Balled. My leftovers stash is building...one pair at a time...mwahahahahahaha!

I too am coveting a scale - you make such a good argument for investing in one I just might have to parrot it!