When I did a design for Kim's project club, I carefully wrote up the pattern, and submitted it to her chosen tech editor for review - the eminently sensible Jaya.

I often use a safety pin in my lace projects, as a way to mark the right side of the fabric.

But I often type faster than I think....

That in itself is funny enough.

But with me being a relatively well-known tech editor with a passion for precision, and it being a design for Kim's club (where strange things have been known to happen), the typo stopped Jaya in her tracks.

She actually contacted Kim to check whether it was a typo, or whether I actually meant it...

We've been laughing about this ever since.  It's become a short-hand for "beware: this is the sort of pattern that might drive you to drink".

And when Kim was creating new colours for this spring, she and her team created a truly fantastic orange. The sort of orange I adore wearing and knitting. My favourite colour! 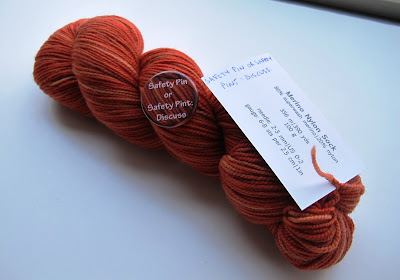 Whoot, whoot!! Congratulations. That is a fantastic colour. :)

I saw it on Saturday...it is truly an amazingly vibrant orange! And the name is awesome.

Wow. You have your own indigodragonfly colorway?! That's fantastic!!

Go you! I should have known that it was one of yours.

How cute! I love when people have a sense of humor!

What a great name and colour! There have been times during some projects when Ia Safety Pint would have been more useful (in the spiritual sense than a Safety Pin...

Congratulations Kate!
Instead of minding your P's and Q's (pints and quarts), now you'll have to mind your pins and pints.
Wendy Setterington

That is one gorgeous color, er colour.

I may need to add to my collection.

haha, what a story behind this color. love it. I would vote for the safety pint! ;-)
and this colorway comes on my list.