Throwing a Retirement Party for a Knitting Needle? 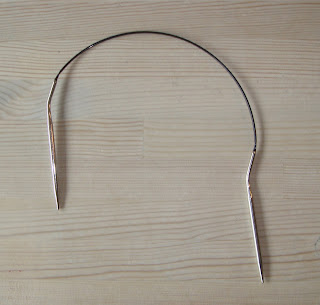 Mr. Pointy is the first "grown-up" knitting needle I bought. He's a 16 inch 4.5mm Inox metal circular. I bought him in the early 1990s, at Romni Wools in Toronto.

Until then, I'd been knitting flat.

I'm not sure which project I bought the needle for - I suspect it might have been the kitten hat. 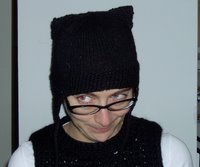 I do recall that Mr. Pointy seemed expensive at the time.

When I think about how many thousands and thousands of metres of yarn have been worked with this needle, even $1000 would have been a bargain.

I've used this needle just about every week since then. Before I was a knitting teacher, I used him for hats and scarves and sweaters and blankets. He's the perfect needle for me to knit worsted weight - my favourite weight of yarn (other than sock, of course). Since I started teaching almost ten years ago, he has lived in my knitting toolkit as my sample needle. Whenever I've needed to do a demo of a technique - of a cast on, a decrease, an increase, a cast off. When designing a range of hats, I used him. I used him to knit some of the samples for my book.

Of late, Mr. Pointy has been showing his age. One of his needles is at an odd angle, and one of the tips is a bit rough, catching on my yarn.

It's time that Mr. Pointy be retired, I think. He's been a loyal employee, I feel like I should throw him a party...

Thanks, Mr. Pointy - we've come a long way together. 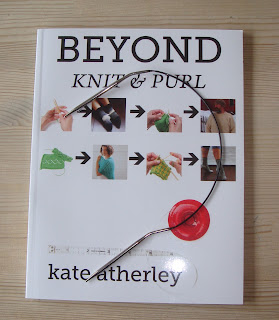 Good old Mr Pointy. Looks like he deserves his retirement.
Who is his replacement?

So long Mr. Pointy and thanks for all the stitches.

What a blast I had visiting you. So much fun!

You did a good job Mr. Pointy!! Farewell!