The Harlot has experienced this issue recently, too.

I have been working two socks at the same time - no, not that way - just two socks on two different sets of needles. One is on dpns, the other on magic loop. I often do this, to take as a prop to my sock knitting classes.

I've been working on the two, on and off, and as it often the way with projects I take to classes as demos, I'm not always paying full attention to them. Stuff goes wrong.

Take a look at the current pair - both almost finished. 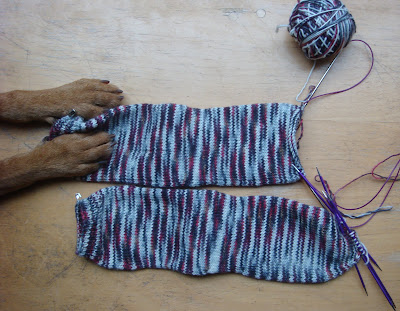 All well and good, but they don't look the same anymore.

I did some thinking and some counting and came to a rather embarrassing realization: I'd missed a gusset decrease somewhere, and one sock has one stitch more than the other. One single lousy stitch can make this much of a difference. Wild, eh?

(Yes, that's Dexter helping me with the photoshoot. He is sad that the socks seem to be too big for him.) 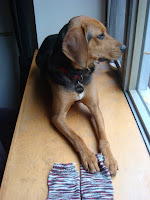 I've had quite a few projects where stitch count has made a huge difference in the colour patterning. Paton/Bernat yarns are notorious for this. Recently, I had a precious skein of STR and I'd start a sock, only to have the colour patterning change suddenly, despite me not changing anything. Went through about 4 sock patterns/ideas before I decided I just wanted to knit a pair of socks--I was so pleased to have been given the yarn (which we couldn't get local in Orangeville back then), that I had to forget about getting a 'nice' constant pattern. Your sock feet are slightly different, but not too terribly so :)