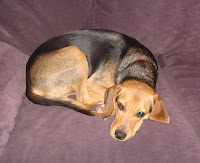 Three months ago today Dexter moved in with us. In the first days after he was found, we shared fostering him with a neighbour, the lovely Florence. Dexter spent the days with us, and nights snuggled with Florence, as we didn't want to leave him alone in his injured and confused state.

In those first days, he mostly slept, as he was recovering from his injuries. He had a nasty cut on his tail, and wobbly back legs - likely due to a run-in with a bike or a scooter.

He moved in with us full-time on July 23rd, exactly a week after he mysteriously appeared in another neighbour's front yard. We got him a new collar and leash, and a tag with our phone number and his (new!) name inscribed on it. At that point, we were still searching for his family - online, through various animal services, and with posters distributed to vets all around the city and around the neighbourhood. At about the three week mark it became pretty clear that he'd settled in, he was feeling much better (thanks to Dr. Larry and team, our excellent vets) and no-one was looking for him. And over those weeks, he became our dog.

Based on how he looks, and his personality and behaviours, we're absolutely confident he's a beagle mix of some kind. We are also fairly sure that the other half of the mix is coonhound, as he looks remarkably like one - just half the size - and displays a lot of their known behavioural and personality traits, including a passion for treeing and barking at squirrels.

Whatever he is, he's definitely a scent-hound. He's also a quick study, a little stubborn, and mouthy.

Things we've learned in three months of living with a hound:

Hi, We have a dog with a mysterious past, also--we found Barney at the Humane Society. All dogs come with their own personality, including quirks, but I've found they usually have more sense than their owners when it comes to bedtime. It's like they say, "Well, I'm going to bed now--stay up if you really think you have something more important to do than sleep."
I'm sure you'll agree that on the day you found Dexter, it was a good match for you all.

I am so glad your guest has found a wonderful permanent home. I just wanted to add one thing you forgot to mention, he's a very handsome guy.