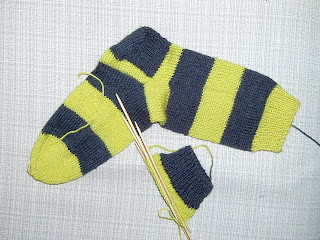 Colour me easily amused, but I love this sort of thing. It's Regia Nation Color -- once again, found in a bargain bin -- in black and yellow. You're going to ask me what nation this particular colourway is associated with, aren't you? This site lets you do a reverse lookup on flags based on colour and layout. Based on my search, I've decided that these socks are in the colours of the St. David's Cross.

I took a fair bit of time to make sure that the stripes worked out. The colours break pretty hard... 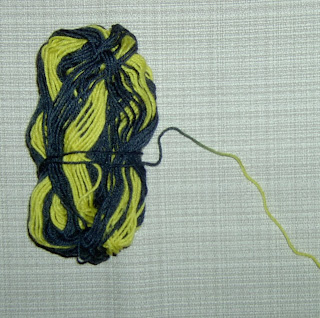 I redid the cast on a couple of times so I was maximizing the yellow and not having any black appear in the ribbing... 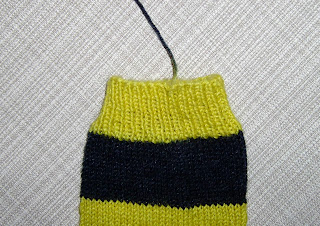 And then as soon as I ran out of yellow, I stopped ribbing and changed to stocking stitch.

The stripes are nice and broad -- about 15 rounds -- so that there's enough for a decent ribbing in a single stripe.

And of course, being an absolute control freak about this sort of thing, I carefully engineered how the colour breaks around the heel so that the stripes flow perfectly down the foot. I started the heel halfway through a yellow stripe, and worked the heel with the grey, and then picked up for the gusset and finished the yellow stripe. 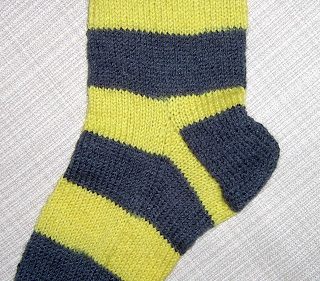 And magically, the stripes worked out so that I was able to start the decrease for the toe at the start of a yellow stripe.

And now the first sock is done, and I'm working the second sock so that the colours are reversed.... stay tuned!

And if you find any of this yarn in the blue and white or red and white stripes, I'd like two balls of each. Thanks!
Posted by Kate at 1:31 pm

Your use of yarn on that sock is beautiful - I'm not a fan of obviously striped yarns - especially in contrasting colours but you've changed my mind. You've celebrated the stripes without letting them just run the whole show. Its a great lesson in designer vs yarn dominance. Thanks for sharing!