I used a picture of a sock in my recent Knitty article -- the "exploded ribbing sock". I designed it in the spring, using a new yarn from Diamond's Luxury Collection, Footloose. The colourway is called "Mouse" which I think is rather cute. It's a rather improbable blend of a soft medium brown and a light grey-blue, which works much better than you'd expect. It's neutral but definitely not dull. 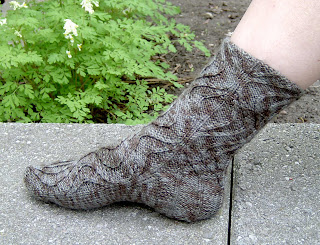 (Click to embiggen to see the detail of the stitch pattern.)

I'm on a bit of a roll designing socks with variegated yarns and reverse stocking stitch. I love how the colours in a short-burst variegated blend on the "wrong" side, and I chose this stitch pattern because it shows a lot of the wrong side, and how clearly the knit ribs stand out. This wouldn't work as well in a very strongly coloured yarn, or in a yarn with longer stretches of colour.

There's only one in the picture because I'd only knitted one. This lonely single sock has been sitting around in my sock yarn stash for several months, waiting for its mate.

Inspired by the number of enquiries and compliments I received on the picture, I decided to finish up the pair and I will be publishing the pattern shortly. 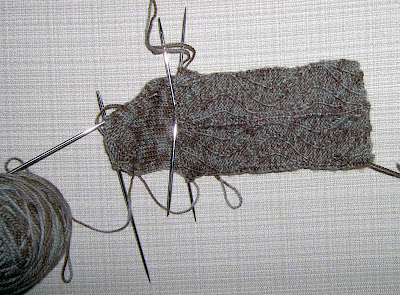 Note carefully the needles. Shock! Horror! I'm using metal sock needles. I never thought I'd go back, and now I'm seriously thinking of throwing out most of my bamboos.

I learnt to knit socks on metal needles -- old school, 8 inch long metal needles. And of course because my first sock was in heavy yarn, they were thick, heavy needles. Awful. I'm honestly surprised I kept at it, because managing the needles was a headache. Once I switched to proper-sized sock needles -- 2.5mm -- they got easier to handle, but still weren't great.

And then about 4 years ago I got my first set of bamboo sock needles. I loved them instantly. Bamboo needles are great because they're light, warm, and a little bit flexible. And compared to older metal needles, I had much more control over the yarn. I also bought the shorter ones, which made a big difference.

Regular readers will remember that several months ago, I was struggling with a heavily cabled design that had a lot of twisted stitches. And I discovered that the points of my bamboo needles weren't holding up. Not only weren't they very pointy, but I was shredding them. Working twisted stitches requires a good point to dig into the stitches. I was wearing down the points of my bamboo needles.

On the recommendation of other knitters, I ordered myself some sets of KnitPicks' Harmony wood needles. Love them. The points are better - sharper and more solid -- and they don't feel like they would break as easily. I'm reasonably careful, but I have broken a bamboo needle by sitting on it.

Faced with the thought of working the second Exploded Ribbing sock -- a sock that's all about twisted stitches -- I tried something new. I ordered myself a set of the KnitPicks' nickel-plated 6 inch sock needles. And yes, I'm in love.

I never thought it would happen. Metal sock needles.

They're light and they're short and those two things make all the difference in the world. And being metal, I don't have to worry they'll break when I stick my project in my purse. (Yes, I always have a sock project on the go in my purse. It's how I have such a large wardrobe of socks.) And the smooth, slick surface is tremendous for fast knitting.

I still love the wood and bamboo needles for travel. Indeed, I'm flying next week, and am really looking forward to sitting down with a set of Harmony dpns and a skein of Malabrigo sock yarn.

Thank you for this article. I am beginner sock knitter and because I like metal needles I bought myself a set of KnitPro's (same as NP) Nova metal needles. All the ladies in my knitting group have wooden needles so I thought maybe I've made a terrible mistake. Good to see the metal sock needles work just as well.
Eli