I feel like the Chinese government (no politically incorrect or tasteless joke intended).... It's just that I've found myself in a mad dash to finish something before the Olympics start. 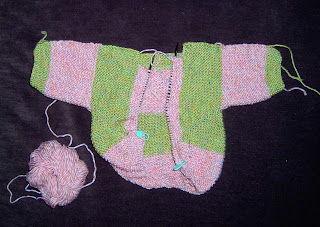 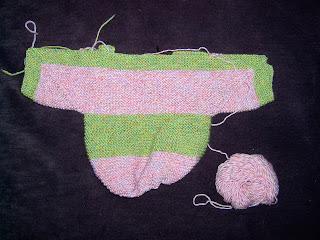 It's going well enough, but I'm finding it -- gasp -- sort of boring to knit. Turns out that large swatches of garter stitch aren't the thrill for me that they are for some people. I think the problem is that it's not entirely mindless -- you do need to keep track of which row you're on to work various increases or decreases, and I was constantly checking my progress, to figure out the colour changes.

There's one final step left -- the lower/front edging and buttonholes. At the rate I'm knitting, it's probably about an hour's worth of work.

As to the Olympics... my trainer and I are sad to announce that I have been forced to withdraw. I've got some commissioned work -- a hat and mitten set, some technical editing, and a design that's been accepted for a book. The deadlines for all three are coming up fast, so they will be my focus for the next little while.

I will, however, finish the BSJ. I can't promise I'll enjoy it, but I will finish it.
Posted by Kate at 8:32 am

I've often wondered myself at people's enthusiasm regarding masses of garter stitch.

I'm enjoying seeing the progress of the sweater. I've got something like seven friends who have had eight babies in the past year (one was twins), and I've gotten behind on baby gifts. I might have to try out the garter stitch for myself and see how much I do or don't hate it.