Messing with a design

I own a copy of the Fall 2002 Vogue Knitting Anniversary issue. It's got some good stuff in it, but there was one particular design that caught my interest at the time.. an outrageously striped textured pullover knit in one piece from the front bottom edge, with integral sleeves, up and over and down the back to the back bottom edge. The only assembly is sewing up the slide/sleeve seams. It's designed by Joan Vass, in Noro Kureyon. 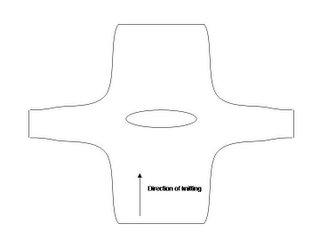 The designer used three different colourways of the Kureyon to vary the stripes. I loved it even before I'd even knit a single stitch with a Noro yarn. It's a clever design, in that the integral sleeves ensure that the striping isn't too insane or clashing.

But the sizing bothered me. It's a one-size-fits-many, with a 49 1/2" bust measurement. I'm fairly petite, and I figured it would just drown me. I briefly toyed with the idea of downsizing it, but I got distracted.

But then I was at the Sheep a couple of weeks ago, and Denny was carrying around her latest project. She had only a couple of inches knit, but I instantly knew what it was... that Noro sweater. I was still worried about the size, though.

And then I saw her wearing it at the shop. I demanded she strip so I could try it on. It's really wide, but the short length keeps it fairly flattering.

So I'm back to thinking about it again. I do need to downsize it somewhat -- probably 5 or so inches in the bust measurement. And I want to make another modification. I want to work it in the round.

Denny used 8 or 9 different colourways -- each ball in the project a different one. But that means that where the sides are seamed you've got a potentially jarring clash of colours at worst, and at best, stripes that don't line up. That's easy to solve, just knit it in the round up to the armholes. But then what?

What do I do about the sleeves? I want to preserve the direction of the knitting, so that the striping stays relatively under control. If I knit the sleeves the usual way, I'll end up with sleeve stripes that run perpendicular to the body stripes at the armhole seam. I could knit the sleeves separately in the same direction as the body and then seam them onto the body, but I've still got the issue that where the sleeves are seamed to the body there will be stripes mixing and possibly clashing. And trying to match up the stripes of the Kureyon seems like a nightmare proposition.

And so I considered how I could do the sleeves in situ as designed, but somehow joining them to the circular body section... .

Thanks to Rogue, a solution has occured to me: grafting. I can work the body in one piece circularly to the armholes, work up to the top of both the front and back separately with the sleeves as designed then graft them together at the top. Or, to eliminate the grafting work on the sleeves, I could actually work right over the top to the bottom of the sleeve back and do the grafting midway down the back.

Am I out of my mind? I'm much better at grafting than I used to be, and I'm certainly not afraid of it anymore. But it's a lot of stitches to graft.... If I do it at the neck opening, there are 110 on either side to graft, albeit in a garter stripe pattern that's probably a good place to disguise a potentially messy graft. Or, if I do it at after the sleeves are done, there are only 109 stitches to deal with, but they're in a pattern stitch, which will likely be fiddlier. (Actually, because of my mods to the pattern to downsize it, it's only 85 stitches. But still.)

And then there's the issue of trying to make the colours work at the graft point. Obviously, there's going to be some clashy-ness when I start a new ball, but will it stand out too much at the graft point? I have to assume not. If I graft at the shoulder seams, I think any clashing will be less disturbing than if I do it mid-back.

This is probably all moot, as I'm planning to follow Denny's lead and use as many different colourways as I need balls, so there's going to be insane collisions of colours regardless.