On Being Mid-Atlantic; Whither Stocking Stitch? The Eggcorn! 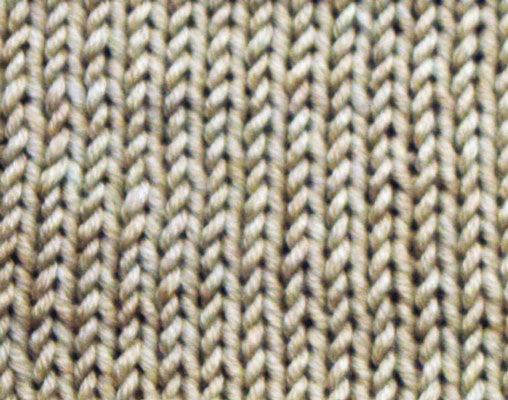 I've lived in Canada some time, but my language often reflects my UK upbringing. Both my accent and choice of words have been described as 'mid-Atlantic'.

It's totally unconcious, "tom-aaah-to", "yog-urt", my overuse of "lovely", that sort of thing, but I do feel like I am pretty bilingual, with equal capacity to function and be aware of language on both sides of the Atlantic.

This week, however, I had a surprise...

In the last little while, I'd heard more than one knitter clearly enunciate "stocking-knit", to describe the fabric you get when knitting on one side, and purling on the other.

I asked on Twitter if this was just a mis-reading of "stockinette" (as I felt it might be), or whether it was a regional pronunciation.

A Canadian in my tweet-stream suggested that it might be a sort of portmanteau of "stocking stitch" and stockinette", a sort of compromise pronunciation, somewhere between the two. This seemed to me a reasonable answer: after all, if you're learning a word that you haven't seen written, you are led by how others say it (witness common mistakes like "I should of done my homework last night", and my confusion about the name of the Canadian film director Ruba Nadda - until I saw it written down, I honestly thought it was a man, called Rueben Atta.).  (This led to a different discussion, too, about the phenomenon of the "eggcorn".)

Anyway, I retweeted this reply about the portmanteau theory, and received a number of puzzled replies back, questioning "stocking stitch".  I was quietly amazed.

Stocking stitch is the UK term; and stockinette is the US term for this fabric. (There is debate about whether you need "stitch" after stockinette; my preference is not, e.g. "Work 10 rows stockinette, then bind off" (bind off vs. cast off is a dicussion for a different day))

I had believed that Canadians tended towards the UK usage, and that the US audience would be familiar with both terms, even if they preferred one. From the replies on Twitter, it seems like I'm totally off-base on both of those assumptions...

So:
Brits & Canadians: What name do you use?
Americans: Have you ever encountered "stocking stitch"? Did you know what it meant before I mentioned it?
Posted by Kate at 9:17 am

Like you, I have been described as mid-Atlantic. I was born in Canada to English parents, then moved to the UK before moving back to Canada 17 years later. As with many differences in vocabulary, I understand and use both. I had never heard the term stocking-knit before you tweeted about it. I do know someone who resolutely refuses to change her spelling from 'stockinet"...shudder!

I am American, was aware of both stockinette and stocking stitch, and agree that stocking-knit sounds like an eggcorn.

P.S. work verification is makey, which is very appropriate for a knitting discussion, if slightly non-wordy.

American here - don't think I have ever run across "stocking stitch" before, although I seem to remember seeing "stockingette" used & questioning it to myself before. Can't remember for sure, but I know it was something I figured out was what I would stockinette. I bind off & cast on as well. And I don't think you need to stay stitch after using stockinette.

I remember having an entire conversation once with my dh's great aunt about gravy - she was from the Philadelphia, PA area, while I grew up in KS being raised by southern parents. She meant spaghetti sauce & I have even been warned about it. But we had a lovely conversation & neither of us realized the issue until later.

I'm Canadian and have never heard the term "stocking stitch" before. I've always heard and used "stockinette stitch". I use stitch afterwards and hadn't really thought of not using it ... kind of like "garter stitch", "moss stitch" etc.

Canuck here. I've always heard 'stockinette' from other born-and-raised Canadians, but I believe I've seen 'stocking stitch' in older publications. I've certainly heard it from friends from the UK, and never had any particular problems 'translating' back and forth.

My 1st knitting language German, and I learned (standard, UK, Oxford, The Queen's) English in school but (to the dismay of my teachers) fell in with an American crowd at 16, so my English has always been a bit mixed up. I'll use American spelling, but insist on irregular verbs, those kinds of inconsistencies.
In knitting terms, I use stockinette without stitch, have come across stocking stitch, and cringe at stockinette stitch.
But as long as the fabric looks like glatt rechts gestrickt, it's all good!

American, here. I usually say stockinette but I have heard/seen stocking stitch and never been confused. It does sound more British to me, though.

I love watching linguistics "happen" like this. I'm American and use stockinette, but I have heard stocking stitch. I mostly see it when I'm knitting European patterns.

I'm an American and was taught Stockinette. But I love vintage patterns and books and have often seen "Stocking Stitch" referred to in them. As soon as you said it, I assumed they were the same.

In New Zealand we use stocking stitch but I was aware of the term stockinette from the US due to reading blogs and yes I prefer cast off.

I am Canadian and I have always used the term Stocking Stitch in conversation or when I am making notes. I have seen Stockinette used in patterns and on the internet, however; I wasn't aware that Stockinette was an American term (I thought it sounded more British). I had never heard of Stocking-Knit before but I think it makes a lot of sense when I think about it.

Canadian but I spend a fair bit of my time in Scotland as well. I use whatever is going. I figure it make me bilingual. Was delighted with the eggcorn link.

Canadian: I use stockinette but have patterns that use stocking stitch. I can use either term. Are you going to tackle "gauge" vs "tension"? ;)

Hi Kate
I think you've opened Pandora's Box with this. I 'm Canadian and have heard both terms used. Reflecting back on my early knitting days stocking stitch was the term I was introduced to. Could be the Irish and Scottish ancestry.
What you haven't introduced into the equation is the influence of the French language for those Canadians who are francophone or who live in or near francophone communities. I can spell American English, English English and a Canadian-hybrid English that draws on either English or American with a few French spellings thrown in e.g. fibre rather than fiber.
Peggy Wallace

British, call it 'stocking stitch', but have never consciously had to translate 'stockinette'to myself - it seems to me entirely obvious that they mean the same thing. - It's an obviousness I'd check, though, if I were about to hang 90 hours' knitting on the supposition.

I rather like "stocking-knit": there's something resolutely human about that co-option of unfamiliar idiom into the familiar. I recently came across pissant, pronounced, piss ant: an entirely logical way for a non-Francophone to give a foreign word the spirit of its meaning.

I'm Canadian...I've heard both terms but use "stockinette" myself!

Stocking stitch was used in many old (historical rather than last years ) patterns. Knit plain was also used frequently . I have knit from patterns from early 1900's and they assumed a common knowledge of their readers. From the illustrations I understood knit plain to mean a stockinette fabric.