What I've Been Up To

I'm doing more paid design work of late, and I absolutely love it, but it forces me to keep the knitting secret. I can't share it with my world!

I've been (mostly) all about lace of late.

I'm into the second of a three-part lace series, in addition to the recently completed Shetland Skies shawl, another circular shawl idea that's cooking, a rectangular scarf, and a less-lacy triangle. 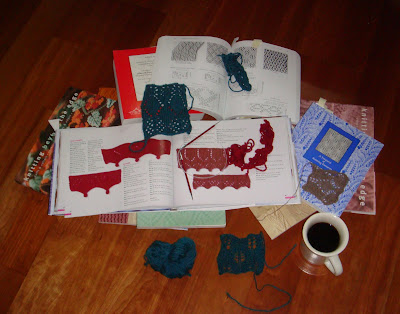 But after 3 days, I cracked it. And now all I have to do is knit it ;-). Aided by more coffee, of course. What also helps is that the yarn is some of the nicest I have ever used - laceweight cashmere in a gorgeous warm brown colour. 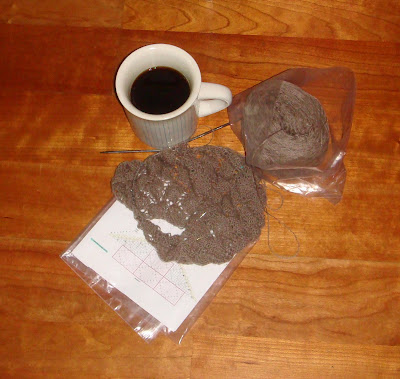 The colour is important because, as I might have mentioned, I drink a fair bit of coffee. And this way I don't have to worry if I spill any on the lace. The first in this series was worked in a powder blue colour, and I spent the entire time worried I was going to stain it.

And just in case you're worried that the Queen of Socks has forgotten all about socks, there is a quartet (!) of socks in the works, too, to be published somewhere nice a little later this summer. Let's just say that I'm having some fun mixing and matching colours.
Posted by Kate at 8:18 am

Hi! Just checked into your blog..after traveling to China and back..I carry my knitting needles on all my trips..I carry both wooden and metal, circular, and dpn..I roll them into my projects..no problem until I was in Korea, when young man thought my crochet hook was questionable..I gasped..my grandmother's..it passed.