A certain knitter (you know who you are, Miss L.), has been madly watching the World Cup. During her team's first game, she knitted lace.

For the next game, she chose a sock.

The problem is that her team actually happens to be doing quite well, so she's been looking at the screen, and not her knitting.

We've been fixing a fair number of mistakes. I suggested that a garter stitch scarf might be best for the next game, as it's a critical one against a better-rated team.

For me... well... I think it would be better to look at my knitting rather than the footie.

I wonder if I have time to whip up a flag before they are knocked out? 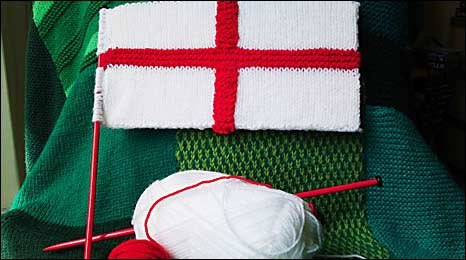 I'm sure you know by now, England has (miraculously made it in), so more knitting ahead! Because of broadcast/work schedule I've done very little World Cup knitting, which makes me sad. Go England!!