Mary-Cate tells this fabulous story... in her own words, direct from the email...

I was once offered (several times) a bottle of red wine by a fellow train passenger, if I let him let knit “one, just one, REALLY just one” stitch on a scarf I was knitting for my Mum. This drama played out late last winter as I was trapped on the inner seat of Scotrail train on a journey from the Highlands of Scotland to Glasgow (a loooong journey) by a man and his “gammy” leg which he had to rest on the outer seat. Calling himself Kenny “just like the first king of Scotland” (a dubious claim if ever there was one) he had long believed that his wife was part of large female-based conspiracy about knitting. As far as he could tell there was no difference between a knit stitch and a purl stitch and felt that said wife (clearly a VERY long-suffering woman) in claiming there were two different stitches was somehow putting something over on him. Yelling [nb to be read in strong Glaswegian] “c’mon hen gise us jes’ one stitch” he tried to persuade me to give him knitting lessons. We eventually did have a ‘show and tell’ version of lessons but for very good reasons he was not allowed to take needles in hand. When the conductor came by to ask me if I was okay my new friend Kenny looked up and said “nae worries pal she’s teachin’ me ta knit’. 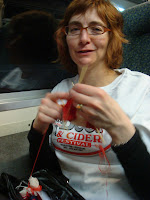 In my experience, the drunk sitting beside me on the train bothering me about my knitting is usually my brother T., after an evening at a beer festival.

But that's a story for another day.

Mary-Cate wins the book - please send me your mailing address!

For honourable mentions, TracyKM and Kelene get packets of my sock patterns. Please email me at kate at wisehildaknits dot com and I'll email them out to you.

thanks for entering, everyone!
Posted by Kate at 12:43 pm