I Tried It Again/Smelly Needles

Some interesting discussion on Magic Loop, within the comments, on Twitter, and in my classes this week.

I was working on another Open House Sock, this time in Koigu, and I decided to give it a go again. 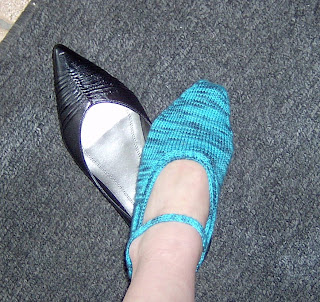 I'll be honest, part of what has kept me from magic loop has been the needles themselves. Everyone told me that Addi Lace needles are the way to go - the needles are pointy but not too slick, and the cords are nice and flexible.

So that's what I tried the first time around.

And I gamely knit a pair of socks. But as I was working, I noticed something weird. I honestly thought it was just me at first. Or maybe the yarn.

But no, it's not just me. And it wasn't the yarn. Addi Lace needles give off a distinctive smell. A coppery tang.

There is brass in the needle composition, and as they warm up in your hands they smell. It's stronger for some knitters than others, apparently. Something to do with skin chemistry. And for me, it's pretty damn strong.

Inspired by some of the feedback I had about cord length, I decided to try again, this time with a 40 inch long Addi Turbo. They don't smell, which is great, but they simply aren't as good for magic loop. The cord isn't as flexible - I actually managed to make a little kink in the one I was using. And the points just aren't as sharp. The needles are faster, though. The Addi Lace needles are a little bit slower, not as slick - which is terrific for lace. But you don't necessarily need that level of control for stocking stitch socks. 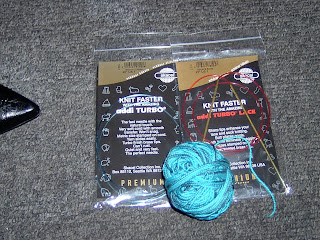 So it's back to my dpns, at least feeling relieved that it's not just me that doesn't like the smell of the Addi Lace needles.

On a related note, TracyKM left a comment on one of my recent posts about magic loop, pointing out that she found a reference to it in Debbie New's spectacular book Unexpected Knitting. She doesn't give it a name, but says that she's been doing it and teaching it for years. I wonder when the name got attached to the technique...

And on a different related note, one ball of Koigu is enough for a pair of Open House socks!
Posted by Kate at 6:41 am

I love the knitpicks circs for magic loop!
also, you can do it on a smaller cord with just one loop as well... I did that with a hat i made recently.

Agree wholeheartedly on the Koigu (the Cadillac of sock yarns, if you ask me, not that I'm very experienced). I finished the pair of Open House socks for my friend who has a 5.5 foot size so the band really wasn't necessary. Love it.

I'm glad that it's not just me that gets smelly fish hands with the lace needles. I know that it's not everyone that is affected because my knitting group members don't identify with my problem.

A really radical suggestion for the smelly needle problem--how about bamboo double-pointed needles?