Am thinking about the Knitting Olympics, absolutely. We have a more important TV event to knit through before then, though... the election on Monday. I'm hoping, frankly, that it will be a good night of television in that I fear the Tories will do very well, and I really need the races to be close so that they don't get the majority the pollsters are predicting. Although I am absolutely anti-Tori for a multitude of reasons, it's got to the point that I feel that the best I can hope for is them to form a minority government. (The depressing nature of this is a whole separate screed for another time.) I'm planning to knit socks, as I can knit on autopilot, no matter how excited/tense/despressed I might be.

(No matter what your politics, please exercise your right to vote.)

I'm going through a sock thing at the moment. Am into my second pair of Fleece Artist merino socks, this time trying a 3x1 rib for the leg and upper foot. This colourway has been dubbed "1970s appliance". 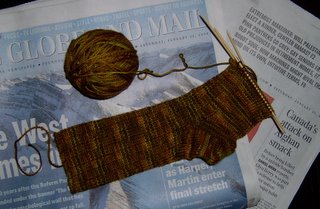 (It's a bit lighter than the picture shows, all avocado and harvest.)

I wore the first Fleece Artist pair (2 inches of ribbing at the topic but otherwise all st st) this week and found they got rather baggy by the end of the day. I'm hoping that the 3x1 will stay tighter. Am washing the first pair today so we'll see how they hold up.

Have even cooked up a design to use up the 2 shades of green, red and white sock yarn that I bought for the long-ago abandoned Holly Leaf socks from the first Vogue Knitting on the Go Sock book. Love the design but there's two major problems with it -- they're knitted flat, which I think it absurd, and they're a nightmare of intarsia. I got halfway through one, had to scale back the colour work, and it still nearly killed me. I unravelled it last week, four or so years after starting the damn socks, and have some ideas cooking for how to make my own Christmas sock.

On the topic of the Olympics, though, I'm a bit frustrated. The suggested yarn for the Teva Durham double-knit vest, Heirloom from Australia, is hard to find in North America, let alone in Canada. Have emailed the distributor asking if anyone carries it that might be able to ship it to me, and I haven't had a reply. Of course, I can make a substitution, but am finding the gauge information about the two yarns somewhat vague... it's an Ozzie 8-ply, which I think is a worsted but it might also be an aran. Need to do more research.

My other thought, keeping to the idea of making it a challenge, is to knit a lace shawl. Or perhaps lace socks? I think I'm more likely to wear lace socks than a shawl. Regardless, I've got a bit more time to consider.
Posted by Kate at 1:45 pm