In all the fuss about the book, I sort of lost track of the fact that I had a new design coming out.

I actually told someone the other day that I hadn't been doing much designing of late. She laughed at me. 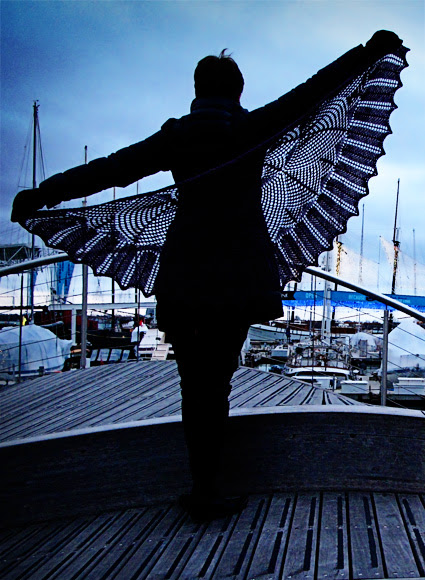 I've been playing with the Pi shawl concept for a while, and I published the Rosetta Tharpe Pi shawl this summer. I adore Ms. Rosetta a lot, and I wear her often.

A friend of mine said that she thought it was great, but reckoned that half the knitting was wasted. I asked her to explain. Her reply was simple: you're always folding it in half, aren't you?

She's entirely right. I tend to fold Ms. Rosetta over to wear her. So why not save myself half the time and half the yarn?

Like the Sick Day Shawl, this is a semi-circle, based on the same principle as the Pi Shawl. They're tons of fun to design! But also faster to knit and easier to wear! I've also made it faster by using a heavier than usual yarn: who says lace has to be worked in laceweight? 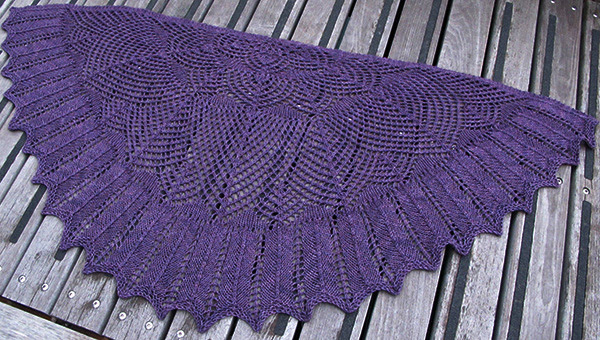 The lace looks complicated but it's really not. I've used one of my favourite stitch patterns for the edging: the classic Shetland Razor Shell. 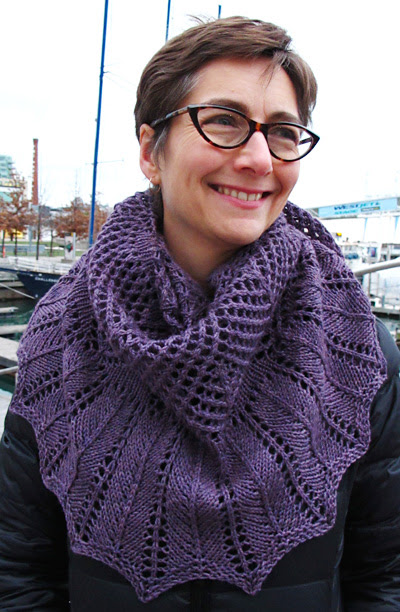 The response has been wonderful so far, for which I'm very grateful.

Amy did the photography, and I'm utterly thrilled with how she made the piece (and me) look.

The location choice was a stroke of genius on her part: the Wavedeck at the foot of Simcoe Street, right in Downtown Toronto.

I used to work near here, and it was lovely to enjoy the sights I used to have to ignore while I was suffering through a corporate gig.

It's also not at all obvious that I was freezing cold and my arms were shaking from holding it up for so long. As any knit designer's model knows, it's remarkably difficult to stand still with your arms in the air for any length of time.
Posted by Kate at 12:56 pm