I am over the moon to announce the Spring 2014 issue of Sockupied magazine. It's already an honour to have a design in it, in such great company with designers like Lana Holden and Stephanie Van Der Linden.

But I was also interviewed, for a feature about me and my work. Here's my name, right on the cover! 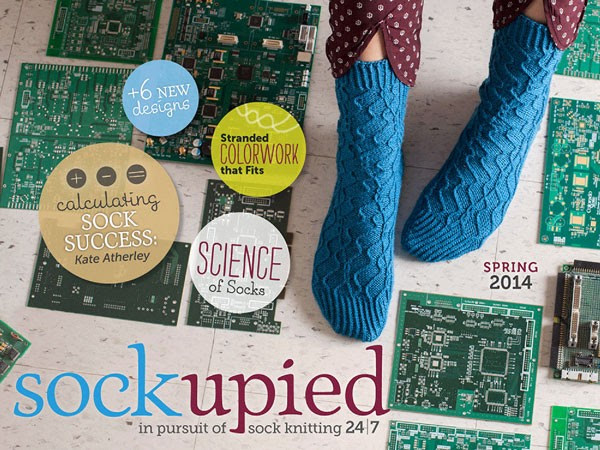 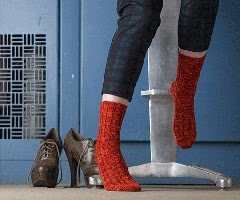 My design, Constant Cables, takes some of my favorite numbers - mathematics constants including Pi and e - and cleverly encodes them into cables.

So I had an idea... why not use these numbers to create non-repeating, un-ending cable patterns. Pi is represented by a C3 - crossing 3 sts over 3, and the number of even rounds worked between the cable turns are determined by the decimal points. No matter how long you want your sock to be, you've got a cable pattern!

Nerdy? Insane? Wonderful? All of the above, I hope!

I also got to use MY colourway, the wonderful Safety Pint from indigodragonfly.
Posted by Kate at 9:49 am

I love this idea. Can't wait to get my new sockupied!

I don't understand the math, but your design is gorgeous!
Bravo!

Thanks for the clue. I understand pi and phi. The other two are beyond my grasp -- but found them in Wikipedia and was able to match them up. Cool. Thanks for the challenge -- and lesson. Now I really do have to knit them.