I have an on-again, off-again relationship with colorwork. When I was a newer knitter, I relished in the design possibilities of using multiple colors in my work. I striped things; I put polka dots on things; I made abstract geometric patterns. I think it pleases my mathematical mind. 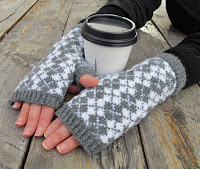 But then as I got more experienced, I started working patterns in other ways: lace and cables, mostly. And for years I worked only in one colour.

Inspired by the work in my own book, I've been revisiting colorwork of late. First there were the Campbell Glen Fingerless Mitts.

And then I developed a Fair Isle hat design as an idea for a new class. This is a classic Fair Isle pattern: 2 color corrugated ribbing (which I adore), and a couple of very traditional yet straightforward stitch patterns combined to great effect. 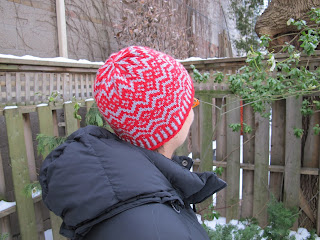 I'm very pleased with how the crown decreases look on this one. 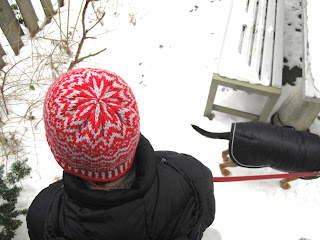 And then sparked by a question from a student, I started playing with Mosaic knitting.

If you haven't tried Mosaic knitting, or are simply nervous about colourwork, then I encourage you to give it a go! It's an excellent cheat - I mean, alternative - for Fair Isle, in that you only work a single color in a given round. The stitches of the second color are slipped. Two rounds are worked knitting the MC and slipping the CC, and then two rounds are worked slipping the MC and knitting the CC. Four pattern rounds equals 2 complete rounds in each color. Barbara Walker is the queen of Mosaic Knitting, and this stitch pattern comes from one of her treasuries. Its unusual in that it's worked in stockinette stitch; most Mosaic patterns are at least partially garter stitch. I adore this particular stitch pattern for two reasons: in stockinette it really does feel like cheater's Fair Isle, and it's just so very mod.

And so, The Mod Squad Mosaic Hat 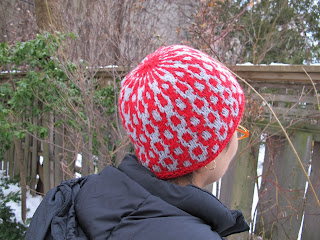 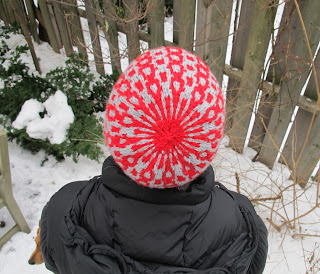 Sized for adults - small and large sizes. And both patterns include a tutorial for working that particular colorwork technique, and tips for working from charts and blocking. Mod Squad has instructions both written and charted; Cherry Fizz is charted only.

Either pattern can be worked from one skein each of two colours of Cascade 220... in fact, one skein of each is enough for both hats!

The Mod Squad hat is so adorable!

HAPPY NEW YEAR Kate.
Just beautiful, I loooove both hats and will be my next project once I finish the fiddlehead mitts I'm working on (my 3rd) but my work is still too tight so I wanted to attend last Saturday's class but something came up.
Again lovely hats, can't wait to make my own.
Grace.

These are both terrific Kate. I absolutely LOVE how the crown shaping came out on Cherry Fizz (brilliant name, btw!). Any chance of mittens to match the hat?