Winter Has Returned: Need to Finish that Second Sock ASAP 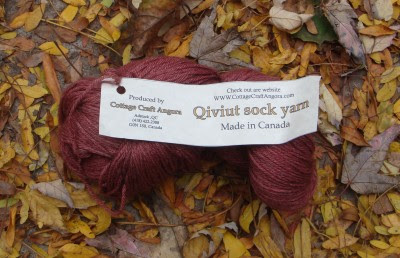 Qiviut is 8 times warmer than sheep's wool. And it's now 8 times colder than it was when I bought the yarn.

Well, ok, that second bit might not be scientifically accurate, but it certainly feels that way.

I've been working on these socks on and off for a couple of months, but the winter has been so mild this year that I haven't really felt pressured to finishing the project. Last weekend, however, winter arrived in full force and I'm now entirely focused on getting the second one done. 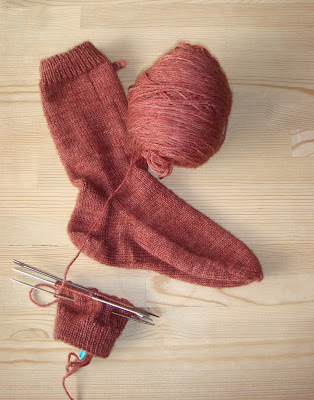 How do you think it's going to wear? Did you abuse a swatch prior to casting on?

Oh wow, I would love to knit some socks from Qiviut blend yarn. I'm off now to check this out.

I went on a cruise to Alaska last year and in a wonderful LYS in Juneau I bought a skein of Qiviut sock yarn and a ball of Qiviut lace weight yarn. I just couldn't pick one or the other so I bought both. I love the yarn!

Guess what. If you google "awesomely funny knitting blog" you come up on top.

Lovely colour on the yarn, hurry up and finish that second sock already (or your toes will drop off - now there's some incentive for you!)

You know.... With your Reynaud's, qiviut mittens might be the way to go!