Ah yes, the old "bathroom mirror" shots. But you know, I rather like the lighting... it's forgiving of the bags under my eyes.

A few days ago I wrote about wanting to recreate an old design of mine...

I've been working away on it, in what few minutes of knitting time I've been able to snatch between games of indoor fetch, and walks, and rope tug. 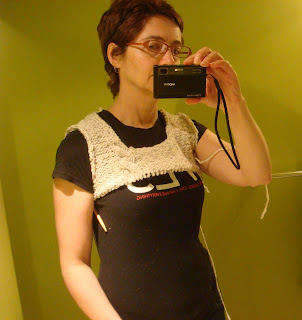 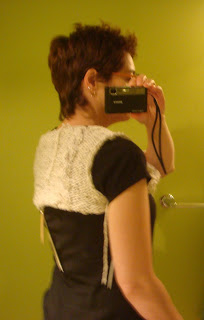 I've not actually changed the original design all that much up to now, other than to work it upside down. The neckline and armholes have remained the same, and I've even kept the same cable. I'm most amused, so far, that I was able to line up the cable so that I was at the same row when I joined for the body. Math is fun!

Now that I've joined for the body, however, I think I will do some tweaking - because a top-down design allows it. I'm going to add some bust and waist shaping, and I know I want it to be somewhat longer than the original.

And since I don't have tons of yarn to play with, I'm going to work the cowl neck and armhole edgings before I proceed.

I'm thinking I will write a tutorial on how I did this...

And here's the promised bonus picture of Dexter... No, he's not doing yoga, he's just having a good stretch. 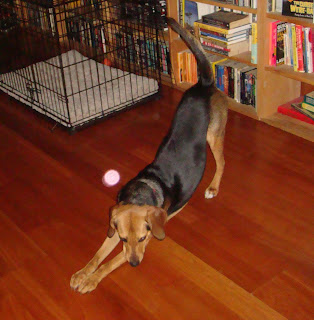 I'm looking forward to seeing the rest of the design. I would be interested in a tutorial.

I am also looking forward to seeing your revamped design Kate!

How cute is Dexter?!

I am curious to know: what does he do with your yarn, does he like it? Does he play with it? Does he sit on your side while you knit? Well... as long as the indoor fetch does not turn into 'yarn fetch' and the rope tug into 'yarn tug' :-)

He is growing healthy and happy, we can see that...!