I remember, once upon a time, that I used to be shy about knitting in public.

In fact, I can remember very sheepishly taking some knitting to a baseball game about ten years ago, and trying to keep it hidden as I worked on it.

Ha! How things have changed - not only for me, but for baseball.

But now, not only do I shamelessly knit in public at every opportunity, but I will even go so far as to try on a work-in-progress. 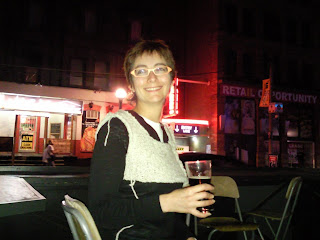 Once the round was joined, I did a couple of increases for shaping at the front. I did consider some short-row shaping, but I realized that it would mess up my carefully aligned cables: There's a single cable running up both the front and the back, and as I had worked it out so that when I joined the body, the cables would be on the same row. If I added some short rows to the front, it would mean that I would work more rows in the front than the back, and the front and back cables wouldn't line up anymore. It's a minor detail, but the sort of thing that would bug me. 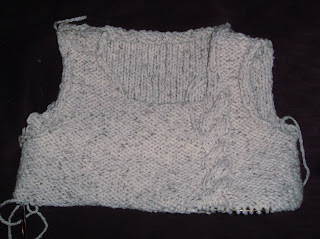 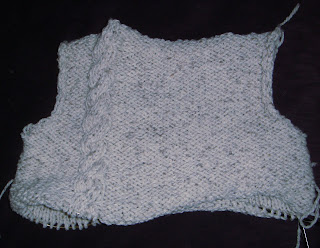 I've just decreased the extra stitches, and am now in the home stretch on the body.

I've also just finished a ball of yarn, so I plan to work on the neckline and armhole edgings next.

I'm keeping the original neckline - a big reverse stocking stitch cowl, but I'm going to experiment with the armholes. In the original, I picked up stitches all the way around and then cast off, just to tidy up and stabilize the edge. I'm going to try a crochet edging to see if that does what I want.
Posted by Kate at 9:55 am

You could do enough short rows so that you've done one whole repeat of the cable pattern on the front and end up back where you left off....(next time...).
Can't say that I'd try something on in public :)