The Knitting of the Insane: 2 Socks in One

(Family legend: a brother of mine went through of phase of listening to some fairly terrible music, and would play his favourite songs over and over again at high volume. After the umpteenth day of Donovan bleeding through the walls, my Dad stormed into the family room and remarked - apparently also at some volume - "this is the music of the insane".)

Whenever I get into a phase of doing something obsessively - particularly something that not everyone shares my excitement about, Dad's expression leaps to mind.

So yes, this is The Knitting of the Insane.

Years ago I recall reading about knitting two socks in one. There's a mention of it in War and Peace, and I recall seeing an article in a publication - which naturally I didn't buy - sometime in the mid 1990s.
And there was a very amusing Knitty article published on the technique a few years ago.

The January 2009 issue of Piecework had another article, written by Jacqueline Fee. It was reprinted in the recently published "Knitting Traditions" special issue published by Interweave. (If you're at all interested in strange/wonderful/historical/unusual/ethnic knitting traditions, go get yourself a copy of this.)

And I was reminded that this was something I really wanted to try.

Sometimes, the only way I can prioritize something is to commit to teaching a class on it. That way, I am forced to put it on my to do list with a deadline. So I floated the idea of a class, and got my needles out
The Piecework and Knitty articles are a good starting place, but not being one to leave well enough alone, I had to mess with things. The Knitty article doesn't really have specific pattern (and she recommends a short-row heel, which I'm not keen on). The pattern in the Piecework article is one-size, which doesn't work for me, and I wasn't keen on the heel and toe shaping. In addition, the designer wasn't using directional decreases, which meant that the gusset wouldn't look quite as neat as I like.

So I decided to see if I could reproduce - precisely - my standard sock pattern. Complete with flapped and gusseted heel with directional decreases, and a wedge toe.

I cast on for one of my training socks, and starting playing with it. 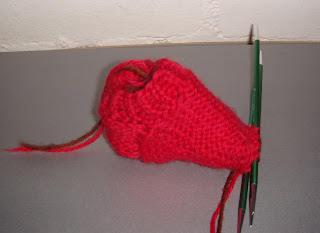 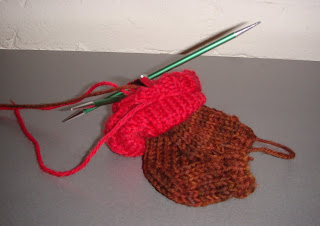 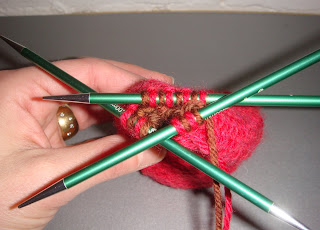 I haven't actually wanted to finish this first one up - I just love how it looks on the needles.

To help myself out, I chose a self-striping yarn, and deliberately offset the stripes so I could distinguish between the two layers. 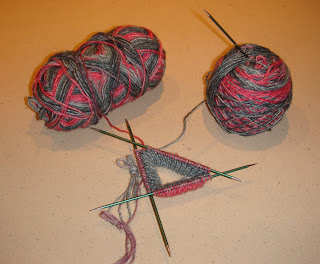 Loving every stitch - it's exactly the sort of bizarre and wonderful sort of thing that makes me very happy.

Stay tuned for class info.
Posted by Kate at 9:05 am

Count me in! Would they be like the double fiddlehead mitts? Could they be reversible depending on your mood or do you think they would wear in a certain shape?

I can imagine it would be very challenging if making both items in the same colour. I'm pretty happy with two at once on two circulars/magic loop; how would two at a time inside each other be better? I'm also fascinated by odd knitting techniques!

Hi! Check out a sock on Ravelry called "Skew". I can't remember the original source but it will tell you there. It sort of twists it's way down the foot and around the heel. I plan to try it when I can get some appropriate yarn. I think it's probably best in a handpaint or self striping yarn. There's none in my stash and sock yarn seems to be completely unavailable here in Portugal. But I'll be taking my annual trip home (east coast,U.S.) in April... Guess why I always return to Portugal with excess baggage!