On Picking Up Gusset Stitches: Avoiding a Hole

This is a sock knitting question that comes up fairly often, most recently in a Twitter exchange.

How to avoid the hole at the top of the gusset when picking up stitches?

(This applies only to a sock with a heel flap - the rules are different for a short-row heel. I'll cover short-row heel holes at another time, if you're interested...)

When you're at the top of the heel flap, have run out of edge stitches, and need one more stitch, many knitters have been tempted by the siren song of that lovely little bar that hangs out between the heel flap and the held stitches of the instep. 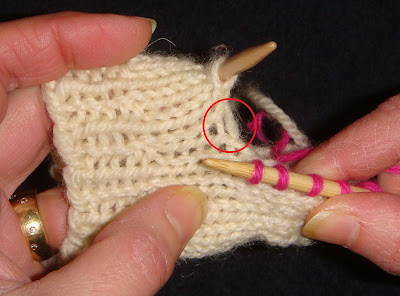 Picking up this one causes a hole. 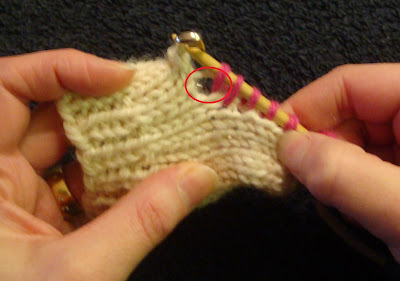 Other knitters just stop at that point, and give up on the extra stitch. That doesn't help either, as it can leave a bit of a gap between the instep and heel flap.

Instead, keep going in the direction you were going... 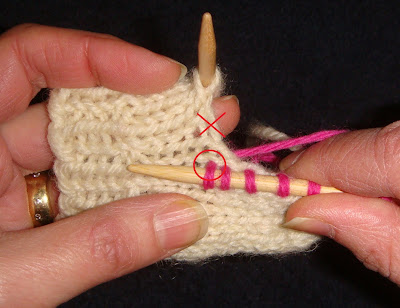 That is, keep going up in the same 'column' you've been picking the stitches up in, in a straight line...

Yes, you're up into the leg of the sock, above the divide for instep and heel flap, but this is a good thing.

First of all, it keeps the gusset pickup in a tidy straight line. 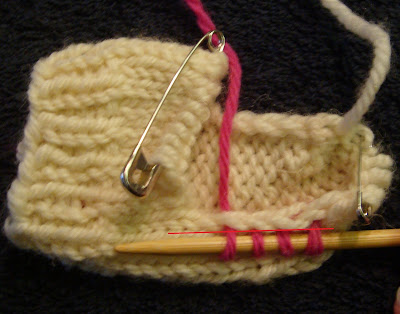 And it handily eliminates both risk of hole and gap. No hole because you're picking up a fully formed stitch, and no gap because you're actually going to cover up the divide. And going that extra stitch makes for a better fitting sock, with a bit more fabric to fit comfortably around the heel.

No, it doesn't create any significant extra bulk.

As to coming back down the other side? Before I start picking up, I count up to figure out where I need to start. And I start up in the leg a bit, to match the first side. 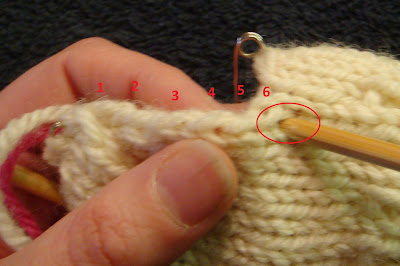 And final tip - on the following round, I work the picked up-stitches through the back loop. It tightens and closes them up a bit, and makes the whole thing a bit neater.
Posted by Kate at 8:35 am

Thank you!! And I would be interested in the Short Row method even more.

THANK YOU!!! OMG I am very excited about this...

Ohhh, I get it! I always have holes there. I'm excited to use this on my next heel! Thanks.

I've knit many pairs of socks and always 'fudged' that extra stitch to be picked up. Knitting the next round TBL is something I've always done, too. This is an excellent tutorial! Thanks for posting it :)
I too would be interested in a short row heel tutorial: both for creating the heel and for picking up stitches. If you're offering...

I will have to try your method. I've had the most success in eliminating the hole using Charlene Schurch's method (from Sensational Knitted Socks). She has rows of garter stitch (three stitches on each side) on the heel flap, and she asks you to dip down to the stitch below that bar to pick up two additional stitches. Her diagrams are better than my verbal explanation.

With my next socks I really have to remember your advise because I do not like holes.

Thanks for posting this! Very helpful. I'll definitely keep it in mind.

Awesome, thanks! I've been knitting socks for a few years and always end up with holes in my cuff down. This is great info!

So useful! Thank you! (the pictures were probably the key to me really grasping this concept, so double-thanks for those.)

Through the back loop! Of course!

And.... Please remind me to hide the wraps on the W&T. My wraps are always showing.

You are so informational. Love your blog!

Thank you so much... I have been trying to figure this out for months!!!!

I just discovered this post via Pinterest. I have to tell you, I am really excited to try this! Since learning the Magic Loop method, I've been knitting my socks with it, using toe-up patterns. I love toe-ups, as it's eliminated the dreaded "picking up stitches" step. I ALWAYS ended up with holes & gaps, and have tried several recommendations to avoid them.

Though I like Magic Loop Toe Up sock patterns, I did enjoy using dpns, knitting cuff down. Thanks for sharing your tip!

Thanks for explaining this very clearly... I finally "get it" now :)

Thanks so much. No more holes in my socks!

Brilliant!!!! This makes a TON of sense, is so simple, and solves a problem all at the same time!!!

Do you have a video of doing this to avoid any holes?

AWESOME, thank you. Trying it my next pair.

I know I'm late to the party, but this TOTALLY TOTALLY works! Just tried it on a pair of socks, and they're looking great and hole-less. THANKS, Kate!

Cool thanks. and yes to short row heel tutorial. Do you ever do afterthought heels? I tried once and it was an abyssmal failure. As in an abyss sized gap at the corners. But it seelms like such a grand idea!

Almost 7 years after your original post this is still reaching beginners. Thank you! I'll be giving this a go today.

I'm another one who finds this post 7 years later. It's genius!

I'm definitely going to have to give this a try on my next pair of socks. Thank you.