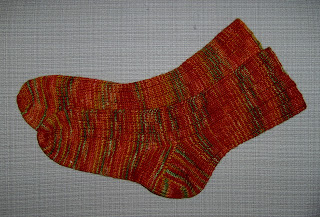 Hey, that's convenient! I've just finished a pair of my own Basic Ribbed Socks, worked using the instructions for the smaller size.

Yarn: Fleece Artist Merino sock yarn. It comes as a kit, but I ignore the pattern because it's awful. (See previous post on this topic.)

I've used this yarn several times before. Other than concerns about wear (which aren't really the fault of the yarn, it's all about the appropriateness of the application), I've been happy with it. 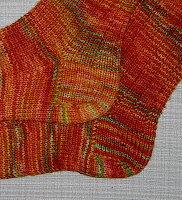 these are the same yarn, same skein, and there's a fairly big difference in the colouring. It's ok, it's not the end of the world, but one part of the skein is definitely lighter. It's not how the yarn was stored, as it was stored in the skein, and I only wound it into a ball shortly before I began to knit. And in the store, it wasn't anywhere near a window. It's impossible that this is fading, it's a manufacturing problem.

Another nudge back towards "commercial" sock yarn?
Posted by Kate at 9:06 am