Another Reason to Swatch

I'm working on the Swallowtail Shawl from last fall's IK. Very nearly done now, it's coming out nicely, and I'm getting lots of compliments on it. I chose Seasilk in a lovely green colour, and the "budding lace" is entirely reminiscent of leaves. I hope that the leaf effect remains after blocking. 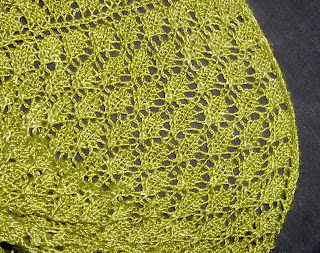 The Lily of the Valley Border, though, it's been a bit of a problem. The chart's perfect, it looks great, and ultimately it's actually pretty interesting to work. But it's a challlenge. The nupps. As I remarked to Megan the other day... "Nupp? Sounds like f***."

It was oddly hard to wrap my brain around the pattern -- and it didn't become obvious until I'd worked a good 12 or 14 rows. And at 220+ sts each, that was a fair bit of knitting. And a fair bit of dangerous knitting, at that... I'd already moved my lifeline up when I realized that I'd not quite got the grasp of it, and realized that a correction I'd made for a missed yo (below the lifeline) wasn't quite the right thing to do.

If I'd taken the time to swatch the lace pattern in advance, I would have understood it before I began, and would have significantly reduced the risk of error, and the possible effects of a poor mistake correction. Will it look ok after blocking?

... There's a small quiet voice in my head suggesting that maybe I should rip back the border and make sure it's right.

On a related topic, I'm a bit surprised/befuddled about the yarn usage. There's 400 or so m in the Seasilk, and reading other blogs I was left with the impression that this pattern uses up almost the entire ball... 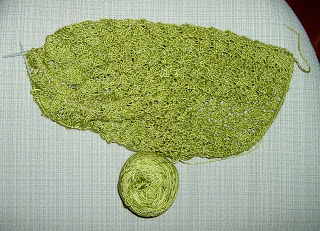 Now I know it's hard to tell, because the later rows have more stitches, but I have more than a third of a ball left over before the final 16 rows.

I did a bit of research online, and at least one knitter has chosen my second option, adding a third repeat of the Lily of the Valley. I'm not sure it works for me... it seems to disrupt the balance between the two borders... there's a golden ratio going on between the width of the Lily inner border and the peaked outer border, I think.

So, #1 or #3? Perhaps the leftover yarn is the knitting gods way of telling me that I should rip back...
Posted by Kate at 8:30 am

Your shawl is beautiful. If you're asking for opionions, I choose #1 by a landlside! Personally, I wouldn't rip - I think your "fix it" will work fine and will go unnoticed by most eyes. I would consider the extra yarn just a blessing and finish the pattern as written and block it.

But if knowing there is a fixed mistake will bug you, or if you're an extreme perfectionist, then do what you need to do. Chelle