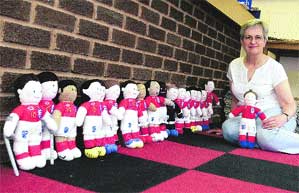 My brother had suggested World Cup Knitting, a while back. If you can knit for the Olympics, he said, you should definitely knit for a more important event.

I had suggested that scarves would be appropriate. I am clearly a dilettante.

Sue, of Wilmslow (a detail only - but highly - relevant to those who know where that is), knitted the England World Cup squad.

Every player who set foot on the pitch.

She started at the first kick-off on June 9th, and finished in the nick of time: by the final half-time.
Posted by Kate at 9:59 am