Something for Mum to show off?....

Although popular, knitting is still, ultimately, a "fringe" activity.  Not everyone does it (although we're trying), and (despite our best efforts), it's not something that's mentioned everyday in popular broad-distribution media.

Sometimes I worry about my poor Mum, who for so many years has had to attempt to explain to her friends what it is I do for a living.  For a long time, it was obscure jobs within the tech industry, varying from things as exciting and commonplace as SGML editing software, to Document Management, to media streaming services.  (My brother Tony is a science teacher - that's much easier to explain to your friends.) 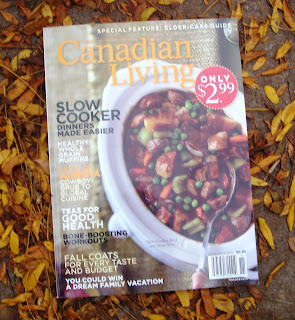 And then I chucked all that tech industry nonsense to knit for a living.  Although everyone knows what knitting is, unless you're an active crafter, chances are you won't come across evidence of my work.  And so there's poor Mum, stuck at the coffee shop, still trying to explain what it is I do.

But now, we have the answer: the November issue of Canadian Living magazine. Canadian Living is ubiquitous.  It's a terrific magazine, and it's been around for a long time.  Everyone has a copy somewhere in their house - often a back issue with one of their terrific recipes marked.  (I still regularly make a mushroom barley soup they published in their pages in the early 1990s.)

It's got food, lifestyle, style and craft features. And they publish knitting patterns. 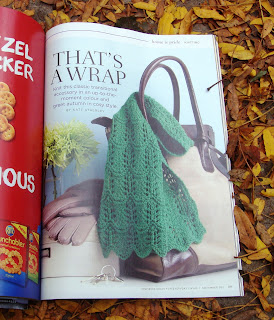 And this month, it's my pattern!

I'm thrilled to appear within the pages, with a lace scarf design. It's intended to be an introduction to lace knitting for knitters of all levels - all you need to know how to do is cast on, cast off, and knit and purl.  My tutorial takes care of the rest.

And Mum can show it off to her heart's content!

Fabulous!I hope she buys lots of copies to show off to her friends!

Beautiful scarf. As I'm just back from plug and play with Amy Singer I have a new appreciation for lace.

But one day I shall follow your example and knit a set of black socks!

That is fabulous,with your instructions more people will take
up knitting without tears & frustration :-)

I like the photo of the magazine on top of the leaves!

Congratulations! It's through this pattern (by searching for it (and you) on Ravelry) that I found your blog. The lace pattern is very easy to remember. I tried to add it to Ravelry, though, and it's not there.

It was so great to meet you today in Waterloo Kate ! The contintental knitting class was very informative and you are an excellent teacher. I have the latest issue of Canadian Living and now I know the teacher!! Look forward to crossing paths again
deb