Got To Give It Up, Pt. Umpteen

I really should practice what I preach.

A., in one of my project classes, started a colourwork project. It was lovely, no question, but required - at the most complex section - 10 different colours going at the same time. Therefore 10 different balls of yarn.

She worked on in during the first class. Slowly, and uncertainly, but she did work on it.

The second class, when she arrived, I asked how the knitting was going.

After all, we do this for pleasure, this knitting thing. Even when I'm working -- you know, earning money with it - it's for pleasure. (The day job still pays more.)

Gave up on that when I decided that I didn't like the stitch pattern, and anyway, I wanted a rectangular shawl. (December 2007.)

And then it was going to be a North Sea Shawl. (May 2008.) Of course, I had to do some math because I didn't have enough yarn, so I altered it, and gamely cast on.

Last week, I pulled it out, took a good look, found about four hundred mistakes (well, ok, three, but pretty frustrating ones), and so I undid the entire thing and restarted it. 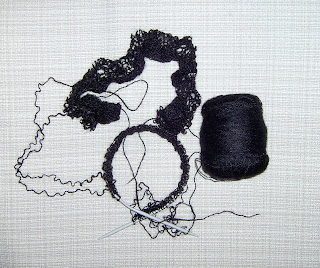 But in a moment of honesty, inspired by Angela's bravery, I decided that the real answer is to give up.

I hate this yarn. It's sticky and horrible. It's a poor man's Kidsilk Haze - very similar composition, very similar hand, very similar beautiful results. It's the most beautiful yarn in the world and I cannot abide working with it.

The only thing this yarn will ever be for me is a nightmare.

So -- anyone need about 700m of Mista Alpaca Lace in black? There's a full skein that's entirely unused, but it has been wound. The second skein, as pictured above, has been a bit used... I think about the first quarter might be a bit tatty -- it has, after all, been knitted and undone three times.

Would be willing to trade - all I want in return is a suggestion for a good laceweight yarn in black. (Well, ok, and maybe a coffee ;-) ).
Posted by Kate at 5:38 pm

For black lace, try the Classic Elite Silky Alpaca.
Its smooth, as long as you use metal needles - I find it grabby with wood of any type...

The Purple Purl has it!