There was less actual knitting than I'd hoped, but lots of variations on the concept of lace.

The most immediately amusing (and knitterly) piece was a traditional Shetland lace shawl, in a lovely off-white wool, with a nice traditional edging. The centre of the shawl was a garter square, with "It sucks" spelt out in yarnovers.

It did rather feel like the show was really two different smaller shows jammed together. There were four or five things I'd describe as subversive knitting, and the rest qualified as lace - radical or otherwise.

The interesting thread with lace is the inherent contradiction in the different materials and methods -- often very substantial, heavy, or hard -- being used to simulate the lightness, delicacy, flexibility of lace. A lacy scuplture constructed of whitewashed found objects, like shelving and fenceposts. Lacy patterns cut into scrap metal. A light fixture created from fibre-optic light filament bobbin lace. Or in a different direction, equally arresting in its inherent contradiction, garments constructed from paper lace doilies.

I was captivated by one particular piece -- a deconstructed carpet reconstructed with staples. From a distance, it just looked like a very worn carpet, but close up you could see that most -- but not all -- of the fabric had been supplemented or outright replaced with staples. Hard to describe, but take my word for it, it's magnificent. My husband was particularly amused by the "tiles" made of chocolate and melted winegums that had 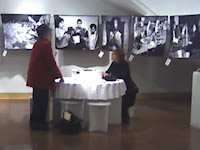 lace designs pressed into them.

I chatted to a couple of other visitors, who once again confirmed my theory of the generation gap in handcrafts. A woman the age of my mother looked almost offended when I asked her if she knitted. "Oh, no, no. I'm just here with my daughter. She knits."

Surrounding the Knitting Table in the basement -- because what's an art show without an interactive component? -- was a series of photographs depicting knitterly topics, rendering in knitting. The most startling to me was a WWII-era photograph of women knitting what can only be described as grenade cozies, wrappers for grenades that were destined to be coated with a sticky substance so that they would adhere to their chosen targets.

But as a knitter, I have to say that the single most amazing thing there was the display of Althea Merback's knitted miniatures. Micro-knitted sweaters and gloves worked with silk thread on filed-down medical needles. 1/12th scale. These are teeny tiny garments... featuring fair isle and intarsia. I swear I might have fainted. For those brave souls, you can actually visit Althea's site and order patterns and needles to create your own miniatures. This is the ultimate triumph of the process vs. the product knitter (more on which later).