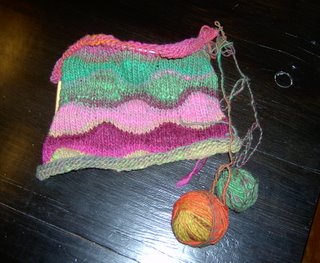 I have Lizard Ridge fever.

I've loved Noro Kureyon since the first time I saw it, just over two years ago.

I've used it for a sweater (the Vass Variation) and a couple of scarves, and I've evangelized it relentlessly. My mother is knitting a cardigan with it, Nicola made a scarf with it, and I try to force it on my students every chance I get.

The colourways fascinate me -- in a Kaffe- Fassett-more-is-less sort of way -- and I've noodled on the idea of a design that uses as many of them as possible. My Vass Variation started down that road in a timid sort of way....

Thanks to the Fall Knitty, I found what I was looking for. Lizard Ridge!

It's genius... an afghan of 24 blocks, each just less than a ball of Kureyon. 24 blocks means 24 different colourways! I actually don't know how many they make in total, but I've already got 10 and I know there's more I haven't bought yet. I'm hoping I don't have to repeat a single one.

I've never actually made an afghan before. I love the idea that each block is in itself a portable project, ideal for my commute.

Like the designer, I was thinking that I'd take it slowly, one block at a time, between bigger projects, or as I find a new colourway.

Phooey to that! The knitting is addictive; I'm loving the anticipation of what colour comes next, and how they combine. I got one block done entirely between some TV yesterday and a couple of subway trips.

Oh yeah, and the "just less than a ball" means that I'm going to have 24 bits of leftovers... I sense a scarf or something! Might be an excuse to actually learn how to crochet.
Posted by Kate at 6:54 pm

Tell me how this goes. I just found this pattern today and I love it.